On October 14, Chinese President Xi Jinping sent a congratulatory letter to the 130th session of the China Import and Export Fair, which is also known as the Canton Fair.

In his letter, Xi noted that the Fair made significant contributions to facilitating international trade, internal-external exchanges, and economic development since its founding in 1957.

Facing global changes and a pandemic both unseen in a century, the world economy and trade are undergoing profound transformations. The Canton Fair, therefore, should help foster China's new development paradigm, innovate its mechanism, create more business models, and expand its role to become a vital platform for the country's opening-up on all fronts, Xi said.

This platform should also help advance the high-quality development of global trade and facilitate the "dual circulation" of domestic and overseas markets.China is willing to join hands with all other nations and practice real multilateralism to build a world economy featuring high-level openness, Xi said.

Chinese Premier Li Keqiang delivered a speech at the opening ceremony of the 130th Canton Fair and the Pearl River International Trade Forum in China's southern city of Guangzhou. He said China’s development is propelled by opening-up and reform, and the country will share its development opportunities with the world to achieve better development. 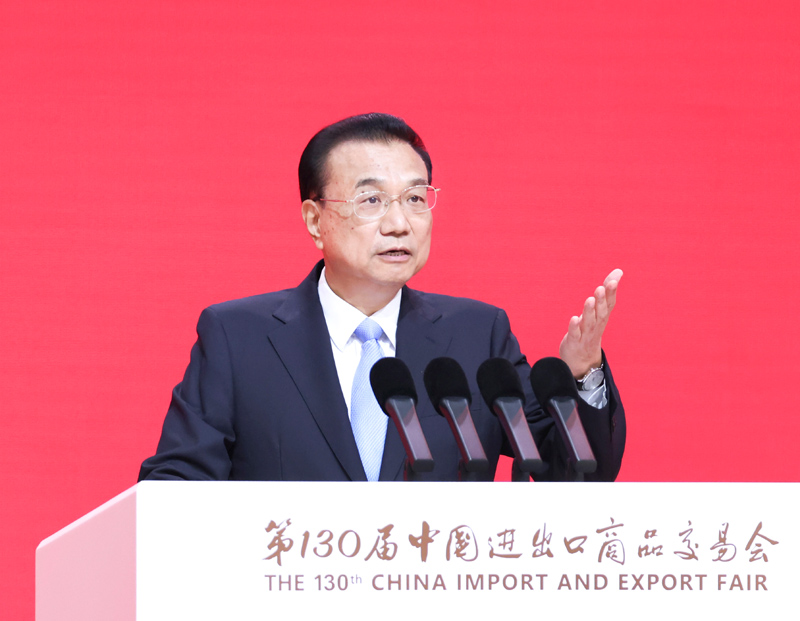 Premier Li said the history of the Canton Fair is a history of China's opening-up and integration into the world economy, and also a history of enterprises from all over the world sharing China's development opportunities and achieving mutual benefit and win-win results.

Foreign leaders spoke highly of the Canton Fair's role in promoting international trade and facilitating the global economic recovery in the post-pandemic era. They expressed their confidence in China's economic development prospects and said that they will encourage companies from their countries to expand cooperation in China to better share China's development opportunities.

After the opening ceremony, Premier Li inspected some domestic and foreign exhibition halls and listened to their briefings on businesses. In the end of the inspection, Premier Li said he hopes the Fair can scale new heights in advancing opening up, win-win cooperation and sustainable development.